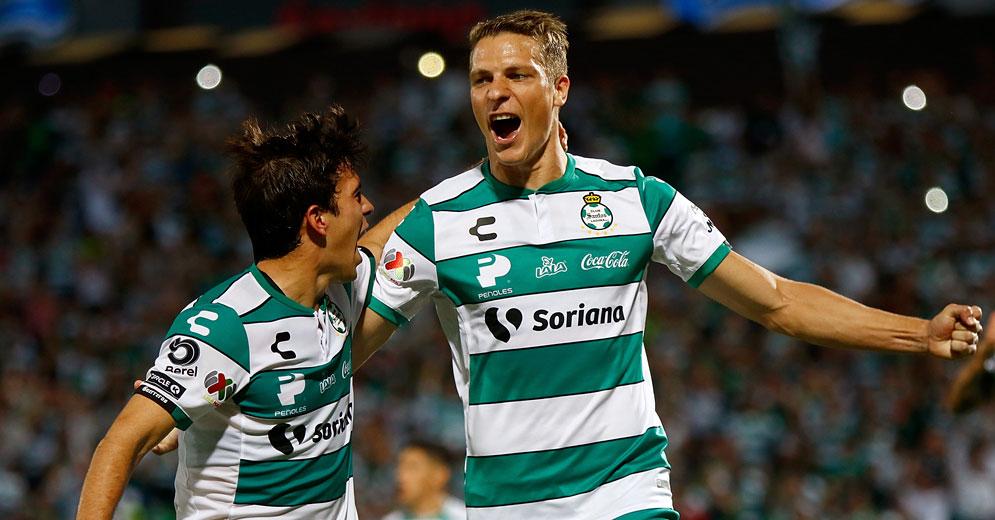 Julio Furch: Team is most comfortable when it gains an advantage from the start

Julio Furch is ready for another liguilla with Los Guerreros, where he says starting in the most dynamic way possible is key.

The Argentine striker, with nine goals to his name, spoke to media in a press conference on Tuesday afternoon after Santos Laguna's morning training session at Territorio Santos Modelo, offering his thoughts on the quarterfinal duel to come vs. Monterrey.

On the upcoming series:

"I think all games in the playoffs are pretty equal and there isn't one game where you can relax or say that you can win easily. I think that we would be wrong if we think that way.

"We may be in first place and Rayados in eighth, they're coming in with a really good stretch and they've gotten better in their last games with the team that they have. It's a team to be respected and I see (the match will be) very even.

We look to go out and win every single game. Under Guillermo Almada we are a very dynamic team... the idea is to win both games starting with Thursday. We know it's a tough place to play and they haven't lost very many games at home, but with our plan, I think that the attitude and the offensive aspect are going to be very important for us...I think coming out swinging from the start will be good for the ambiance of the team."

On how he's coming into the two-legged home-and-away series:

"I'm coming in well, I wasn't able to score any goals in these last few games and maybe I haven't had opportunities in front of goal to score... my teammates have been present for that and it leaves me very satisfied just as if I had been the one to score. I think I always look for the confidence of my teammates and it's great that they're attacking, too. That leaves me a little more calm; (scoring) goals give me more confidence but we're creating chances and the team must win because that's what we're looking for.

To score in the liguilla like I did that one time in the championship final in 2018 is very motivating."

On whether Los Guerreros are the favorites:

"In the playoffs, there are no favorites. It's a series of 180 minutes and everything is very even. To come from first place (in the regular phase), as is the case with us, gives us a lot of confidence and we feel like a team with firm convictions, and those who enter from eighth place are coming in with a lot of strength, knowing that they clinched a spot in the final match week and they're coming in with the confidence of wanting to down the first-place team...everything is very even, that's how I see it.

A bad afternoon and you may be out of the playoffs. We have to concentrate and commit as few errors as possible and try to take advantage of the situation which has given us the rival. If you have a good day or afternoon that can also make all the difference.

I think this team is distinct for the way that we play more than anything; for the coaching staff, how we propose our idea in every game, the individual ideas from each coach... We're a very dynamic team; from the moment we step on the field the team is already pressuring and when the team is attacking it feels comfortable - gaining an advantage from the beginning is where we're most comfortable."

"Barovero is a first-class goalkeeper. I've always suffered in front of him and I think he's also suffered because of me, I think we're pretty even in that sense. He's denied some pretty good chances of mine and I've attempted some pretty good chances on him, too. He's the type of goalkeeper that without a doubt, below the arches is very good and has great reflexes, so we need to try and control the ball well - I think that's fundamental; they have two very tall central defenders on top of it. I think that the game we play here with the pressure that we can impose can do damage so we'll look to finish the series here."

Los Guerreros will finalize details at TSM on Wednesday morning before setting off for Monterrey, where they'll face Rayados in the first leg of the 2019 Apertura playoffs. Kick-off is scheduled for 7:06 p.m. local time and can be seen in the USA on FOX Deportes.