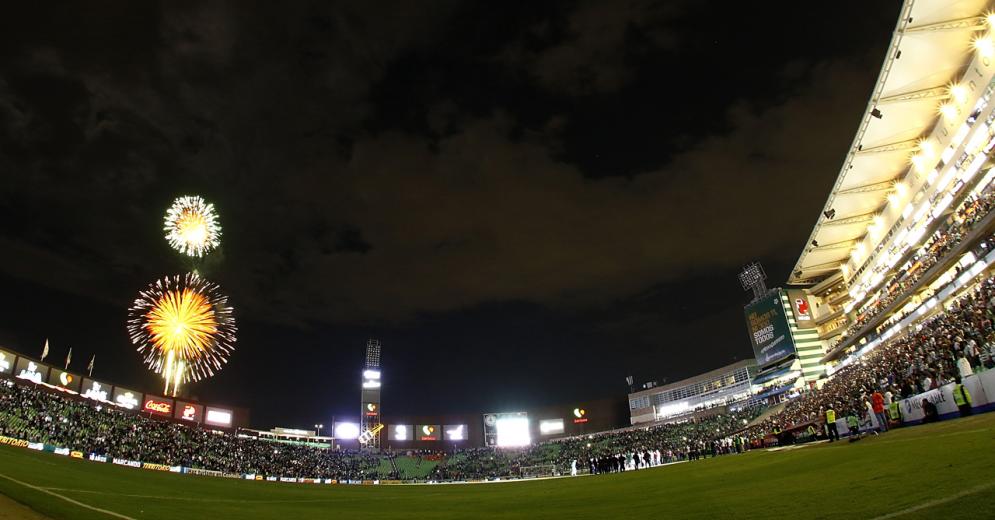 Territorio Santos Modelo was inaugurated on November 11, 2009 with a game between Santos Laguna and Santos from Brazil.

The very first goal was scored by Matías Vuoso - who, coincidentally - scored the final goal in the old Corona Stadium.

Before the match, Ricky Martin performed in a spectacular show which also included the cheerleaders from the New Orleans Saints of the NFL.

The complex was built in a record time of 18 months.

Territorio Santos Modelo spans 23 hectares, and includes the Parish of All Saints, which was a donation of Club Santos and Grupo Modelo to the Diocese of Torreón.

TSM is the only complex in Latin America that has a religious enclosure within its facilities.

The trophy hall includes all of the most important championships and sub-championships won over time by the first team and Santos' youth teams. It includes a replica trophy from the U17 World Cup, which was played in Mexico in 2011, with Estadio Corona being a host stadium during one of the most iconic games in Mexico national team history, where Julio Gomez scored a bicycle kick in the final seconds of the game, sending Mexico on.

The hall includes a photo gallery of emblematic club players and a short biogrophy of each, and serves as an entry way to the the Orlegi auditorium, where first team players are presented and important press conferences workshops, and congresses are held.

On the same leveal and opposite to the Orlegi auditorium is in-house travel agency Ascensa, which was created by Orlegi to facilitate transportation and hotel logistics for the entire institution. Likewise, Ascensa is available to the general public.

The clubhouse has the capacity to house 40 youth players who are provided with everything they need to become professional footballers - from a fully functional gym to a complete nutritional program tailored to each player's specific needs, an around-the-clock kitchen and cafeteria where players receive their meals: first team players are provided breakfast and lunch daily for before and after training and the players who live on campus receive breakfast, lunch, and dinner.

Players also have access to a sports psychologist to help them develop and mentally prepare to be their best, and receive proper education for comprehensive preparation.

Social responsibility focusing on the environment (before entering the stadium)

TSM uses solar cells that help to heat the water in the dressing rooms and generate energy for the illumination of the complex.

Our Santos LALA academy serves young players from 4 to 12 years with comprehensive training.

With a seating capacity for 30,000 fans, it also has a club level and a terrace overlooking the field from Holox Fitness Center.

There are three levels of suites, each displaying the names of former players on the facade who have been named by their former teammates and the club as "Guerreros de Honor."

At the top of Holox Fitness Center are the administrative offices of Club Santos Laguna.

On the west side of the stadium at the north and south corners are two levels of extra-large suites used to for media, sponsors, and special groups.

Below that are all the national flags that represent the players of the first team and coaching staff.

In addition to the suites, there are two bars inside the stadium that fans can enjoy before, during, and after the game: one at the Club level - Bar Corona 83, and one at the main level - Bar Verdiblanco.

Capacity for 70 people both inside and outside.

Where teams arrive and depart, and where the media conference room and mixed zone are located. A jersey gallery of important moments lived at the stadium lines the tunnel from the first team locker room to the field.

-Championship jersey from Santos' comeback in a semifinal against Tigres

The shopping center will be built in the parking lot and the hotel the space between north tower and north head.

A university, for this there is no confirmation date, and is currently planned to be built behind the Santos-LALA training center.

Expansion of the stadium, a structure similar to the west side