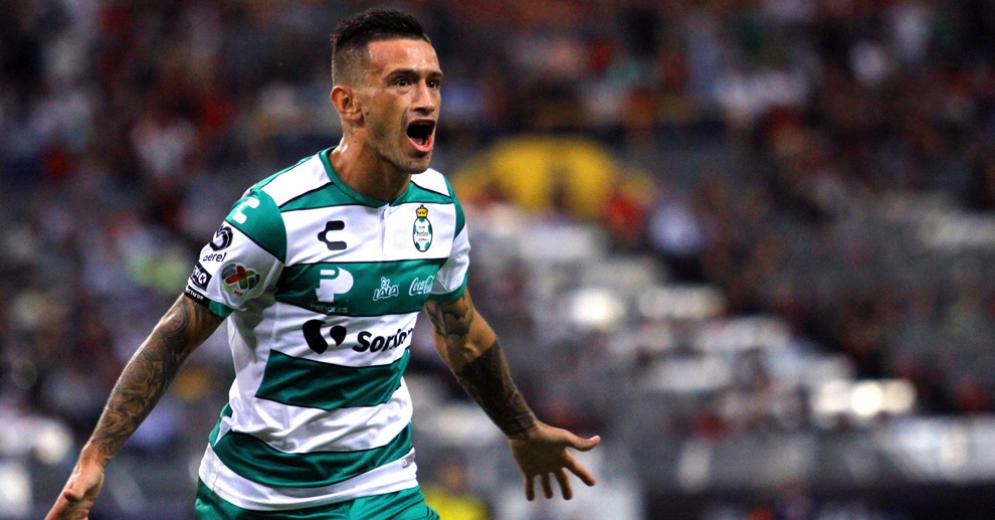 Confident victory over Atlas has los Guerreros in first place

Los Guerreros remain undefeated and at the top of the Liga MX table after their 2-1 victory over Atlas on Friday night at Estadio Jalisco.

Two goals by Brian Lozano were the difference in a game that saw the visitors as the dominant side throughout 90 minutes of play. The Uruguayan midfielder opened scoring in the 16th minute of play after forcing a turnover and sending a powerful left-footed shot into the back of the net, beating Atlas goalkeeper Camilo Vargas.

The remaining 30 minutes saw plenty of action, with Julio Furch and Adrian Lozano connecting for an opportunity which was unsuccesful, and later, Atlas had two clear chances in front of goal, but Jonathan Orozco easily made the stop and the other shot went wide.

Santos' defense was just as on point as its attack - right back Emilio Orrantia made an exceptional defensive play after the 50th minute off a play initiated from service on the right hand side by Javier Correa.

Furch and Eryc Castillo had a chance to double the lead but Castillo's shot was deflected by Vargas for a corner kick.  Moments later, Castillo again pressured into the area causing problems for Atlas' defense although nothing came of his chances.

Atlas responded with a speedy advance by Mauricio Cuero, who sent a gounded ball into the hands of team captain Orozco.

The first change for Santos came in the 71st minute, when Guillermo Almada sent Diego Valdés in for Adrián Lozano. The Chilean number 10 made an immediate impact upon entering the playing field, teaming up with Furch in the 80th minute for a chance that was ultimately denied.

Lozano nabbed his brace in the 85th minute after advancing into the area and initiating a series of rebounds in the area when his first shot was blocked by the 'keeper, but he eventually found space to finish for the eventual game winner.

Bryan Garnica later entered for Castillo. Just before the final whistle, the central referee awarded a penalty to Atlas after a VAR review. Osvaldo Martinez converted from the spot in the 94th minute, cutting Santos' lead in half.

In the final play of the game, Valdés just about sealed a third goal for los Guerreros but his powerful attempt forced Vargas into a save and he was ultimately denied.

With the win, Santos sit in first place of the league table with nine points, and will immediately return to Torreon to prepare for their Copa MX game against Chivas on Wednesday at Estadio Akron. On Sunday, football returns to Estadio Corona when Santos hosts Puebla in match-week 4 of league play.