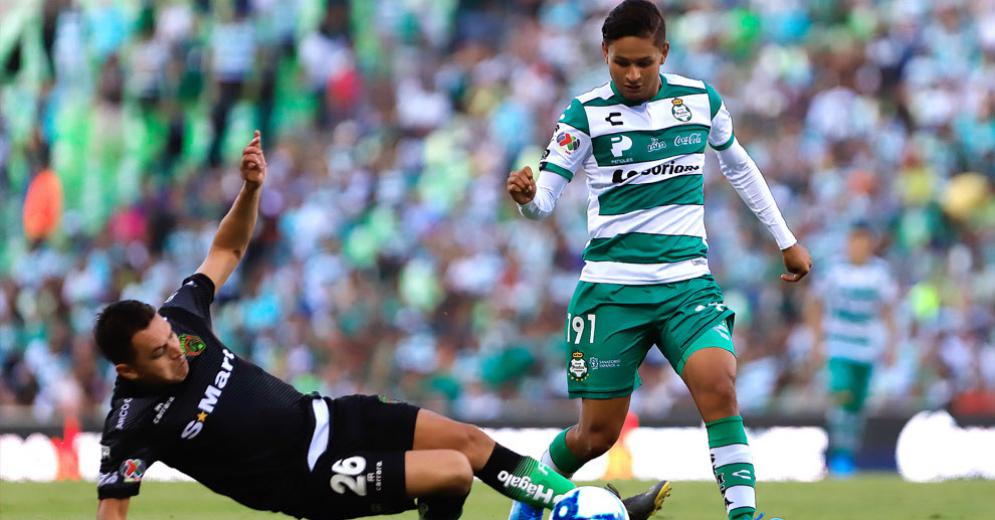 Adrian Lozano: wherever we play, we look to be an intense team

The first goal came by way of a combination play between Fernando Gorriaran and both Lozanos - Gorriarán craftily forced a turnover in midfield and passed to the younger Lozano, who took the ball down the middle and passed back to Gorriarán on the left wing. Gorriarán sent a grounded cross into the heart of the area, where Brian Lozano was waiting to tap it in for the opener.

Orrantia doubled the lead in the second half off a casual back pass in the area from Julio Furch, and Adrian Lozano sealed the 3-0 with a long distance strike from the top right corner, beating Juarez 'keeper Ivan Velazquez at the far post. It was the Santos homegrown player's first goal for the team in only two games.

"I had been looking for the opportunity on goal and when the chance comes, you have to take advantage," he said after the game.

Lozano, who has passed through every category within Santos' youth system, has become a versatile player in that he can be used to aid in the attack from various positions in the field thanks to his quick adaptability -- something that head coach Guillermo Almada has played to his advantage as he shapes his team.

"I feel comfortable on the inside, honestly," said Lozano, "but with Profe Almada I've learned to play well on the outside, on the right, the left or in the middle. I like to change up my positions and play in any form."

Los Guerreros will face their first test on the road in League play this Friday when they take on Atlas in Guadalajara, where the 20-year-old Torréon-native will look to maintain his form and continue doing what won him a starting spot with the first team.

"It's the same proposal at home and when we play away: wherever we are, we're going to look to do the same thing that we've done here," he said. "Since ourgames in pre season - in Cancun and in the USA - Almada has asked for a lot of intensity from us. It doesn't matter if we're in minute 50, minute 80, or minute 90, it's what we need to do and it's what we've been working on."