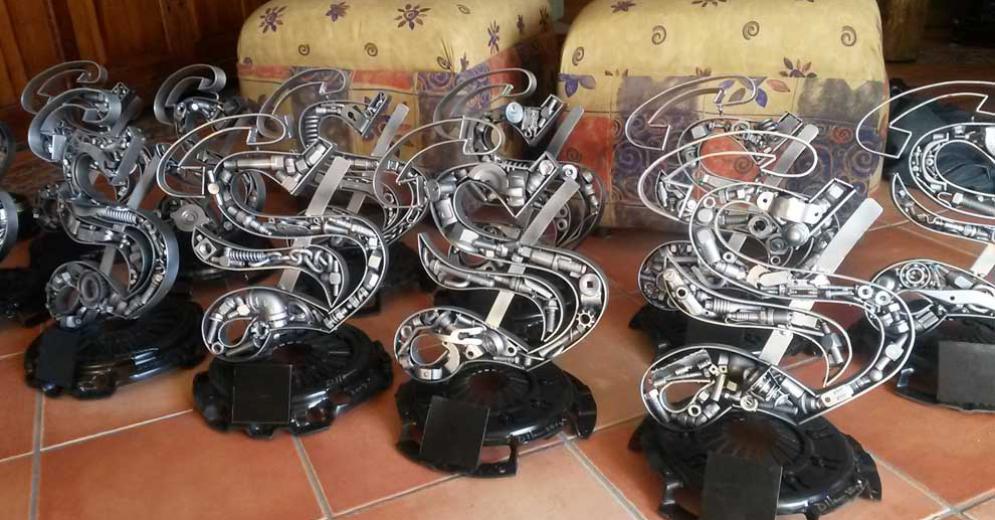 One of the most exciting things about competing in a tournament is the prize at the end -- most cases, it's a title of some sort that comes with a trophy.

In Copa Santos, there are multiple categories which will see champions and runners up crowned, in addition to a Golden Boot and Best Goalkeeper award.

At a minimum, it's 12 championship trophies. Not very often do we consider the time that goes into creating such things for these competitions, and in the case of each special edition trophy for Copa Santos, it's a lot.

Ask Daniel Llanos, Santos' trophy designer for competiions and events like Copa Santos, and for honorary athetes like Jared Borgetti and Oswaldo Sanchez.

Llanos uses parts from a local scrap yard to assemble statues and trophies of anything, really. You ask for it, he will build it. Anything from a soccer shoe to the Santos logo; animals like horses and bulls to cacti and musical instruments.

He also designs human-like replicas to emulate players within Santos who have retired. He recently spent over 40 hours building a trophy for Sanchez, who announced his retirement from Santos in 2014 and was honored in the home opener between Santos and Veracruz earlier this year.

"It's a process involving careful selection of pieces that aren't common," Llanos explains. "I try to use pieces that kids might identify with, like a brake from a bicycle, for example. And the relationship Santos has with Peñoles, it makes sense for the idea to be trophies made of recycled materials."

By estimation, Llamos has about 500 pounds of material in his shop that he's collected, just waiting to be molded and fastened into his next creation, but not until he's finished with all 44 trophies for Copa Santos.

Peñoles is the main sponsor of what is now Santos' ninth annual youth tournament in Mexico - hence the name Copa Santos Peñoles - and Llanos is absolutely right in his assertion that it's a perfect union to incorporate the idea behind Peñoles with Santos' ideas around promoting a sustainable stadium environment.